What chance do you have of getting a real vibe started at home without an LP player holding pride of place? The waiting's over. The time has come to transform your living room or bedroom into the ultimate rock n roll safehold. After all there's a kind of travesty in playing the explosive licks of Queen, Sabbath, or the flaming melodies of Charlie Parker, Bowie, even your favorite trip hop album on anything less than the finest turntable.

A lot of people swear by Audio-Technica, and there's much merit in that idea. For one thing they're built like a tank. We love them too. But if you think that's the whole picture, it may be time to consider some new directions in terms of your next living room centerpiece. Here's our list of the top 10 turntables. Turn it on, drop the needle, and relax into the groove.

NAD C 556
This one's gotten a lot of attention recently for taking an winning concept from Rega and improving on it with a sense of fun and class. As an entry-level Turntable it's still winning the hearts of vinyl-lovers for its insightful engineering. The well-rounded performance of the deck will keep your attention without leaving a serious dent in your savings. If you're brand new to spinning vinyls, this is a damn fun and engaging way to start.

Audio Technica AT-LP120-USB
For the guys and girls who want to own the most legitimate player in the neighborhood but at a decent this one's  a keeper. There's simply no rival in terms of quality at this price point. For starters, it's speed is 100% accurate, which is a miracle for what you're paying. Normally in "plug-in and play" models of this sort, the specs aren't close to what's advertised. Plus, these models, as previously mentioned, are built like fender Stratocasters. Solid. Truth is, they'll last decades, given you treat them with the respect they deserve..

Pro-Ject Debut Carbon
The rise of art-conscious turntable designs has been made clear in the success of Pro-ject. Inspiring us with simple easy-to-use features,  visual force and technologically sound features,  these beautiful Austrian models embody all the best elements of European quality within a well-established company name. Setup is also simple. Just place the platter on, set your tracking force, and put on the anti-skate weight. Slip on an old Led Zeppelin record. Now you're back in that happy place. Rinse, wash, repeat. Simple.

Edwards Audio TT1
If you're a musician or are just finnicky on getting detailed sound , this one will fare your listening experience well. You'll never miss those obscure licks again. And yes, your vision isn't letting you down. There's no mat! Apparently the engineers at Edwards felt that made for improved, more agile playing. It seems to have worked, because this is a serious contender with the Pro-Ject and Rega Models on our list.

Rega Planar 3
A step up from the Pro-Ject Debut Carbon is this legendary design from a raunchy old titan of the hi-fi world. Like all titan's it takes its appearance a little more seriously than it could, but for those who are more attuned to sound than trend, this is an affordable, quality model that's unlikely to lose it's appeal.
As with the Audio-Technica, be sure to pick up a tracking-force gauge. It truly is a joy to set up. Sound quality is nothing short of amazing. Timing, resolution and overall engagement with the record are astonishing, with little skating involved, and the good part is you won't have to break the bank.

Clearaudio Concept
We're diving into the higher-end selection now, and if you treasure your vinyl stack, this will make every spin like taking mouthfuls of creme caramel, without getting sick. The concept offers a full-bodied, detailed sound and can play at a blistering speed, take on the inner grooves without losing its thread, and pulling off all three record sizes without tricky adjustments. It delivers grungy bass rhythms like those of the melvins and delicate jazz licks by Django Reinhard with expression and crisp precision that'll make a music enthusiast's spine tingle with pure nostalgia.

Rega RP8/Apheta
We've one for the turntable enthusiast and high-end gadgeteer. The finest machinery in the Rega range, this model sets sky-high standards in terms of engineering and sonic capability. If you're adept with the art of turn-table manufacture, like to slip on a bit of Kraftwerk on the weekends and know about the joys of a well-balanced plinth, this one is most definitely going to impress you. It's an LP player for the turntable enthusiast.

VPI Prime
The best high-end bargain as far as many are concerned, it's another turntable for the ardent veterans among us. The finish itself is a blend of master craftsmanship and thoughtful engineering. Sounds you thought were just a jumbled dissolution of noise in classic albums like the Pixies' Surfer Rosa begin to blend previously unheard musical streams, giving one the impression of hearing songs for the first time. Although this is also a model for the seasoned turntable collector, it's easy and instinctive to set up.

Clearaudio Ovation
This is the kind of turntable that Van Halen or Stevie Ray Vaughan, possibly even Hendrix himself would  order in a fixture in their hotel if they were still with us. God bless their souls. It combines all of the best features mentioned up until now as far as engineering goes, without you having to think about them.

McIntosh’s MT5 Precision
Highlighted in luminous green, the McIntosh MT5 Precision certainly had no problem standing out in much-praised high-class Soiree's like a legendary event which recently went down in Electric Ladyland . Just having one occasions the right to invite anyone you want as a kind of event on its own. Noted audiophiles have reported finding new meaning in famous guitar riffs like Nirvana's "Smells Like Teen Spirit." But that's to be expected from the company that engineered the sound during the original Woodstock festival. 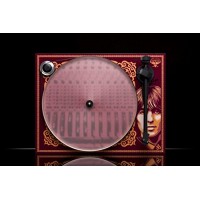 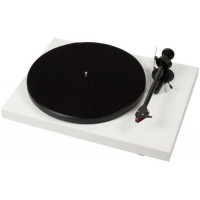 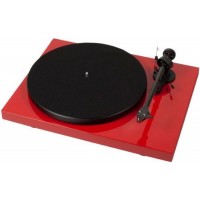 Pro-Ject Debut Carbon: Raising the Bar for Tables Under $500 Now Ships with the Award-Winning Ortofon 2M Red "In the ways that analog trumps digital, I'm confident the Carbon will sonically outperform any cheap CD player.. 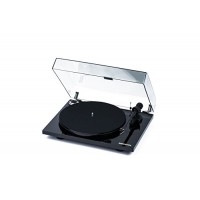 Essential IIIAmodern classic with great sound at an attractive price!Essential III offers a variety of enhancements compared to its successful predecessor, such as a diamond-cut aluminum drive pulley, a resonance-optimiz.. 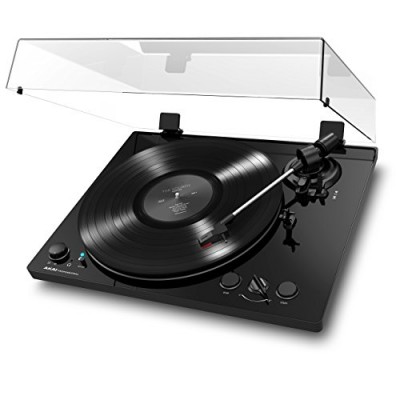 The Akai Professional BT100 has all the important features and outstanding performance that people demand from a great turntable, such as a quiet belt-drive system, a straight low-mass tonearm and a high-quality moving m.. 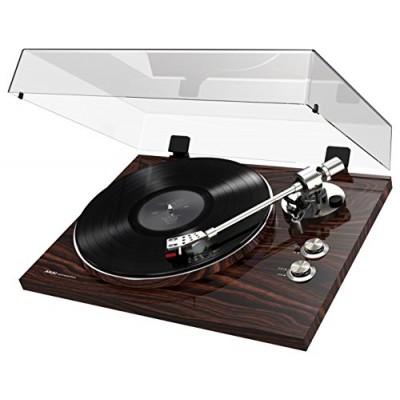 The Akai Professional BT500 belt-drive turntable is an exquisitely crafted, premium performance turntable that extracts every musical detail and subtle nuance from your beloved record collection.All the must-have feature.. 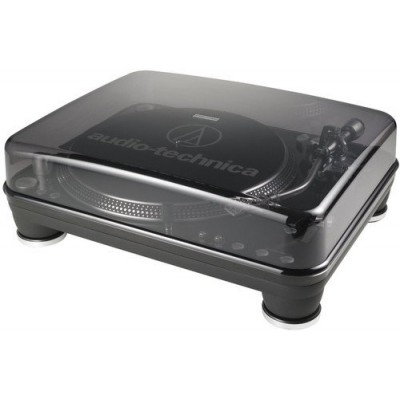 This superbly made, professional quality DJ turntable is designed primarily for DJ use in nightclubs, touring and mobile applications. It can also be used by music lovers to play their record collections at home. Offers .. 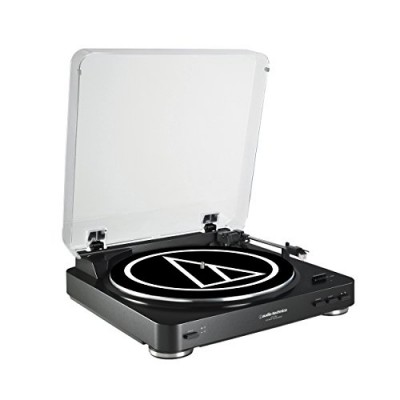 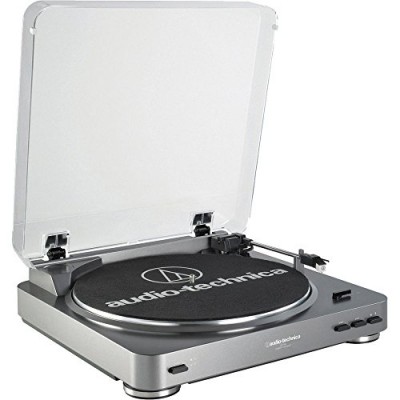 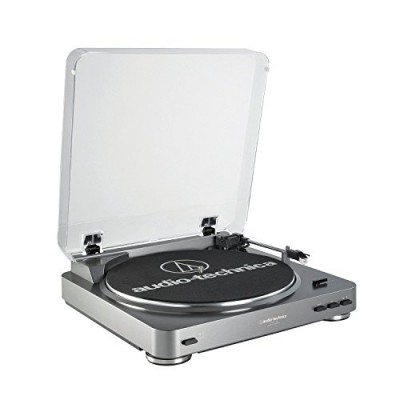 Get your classic albums off the shelf and into your MP3 player. Now you can experience your vinyl's high-fidelity audio directly or convert it to digital. The AT-LP60-USB stereo turntable comes equipped with a USB output.. 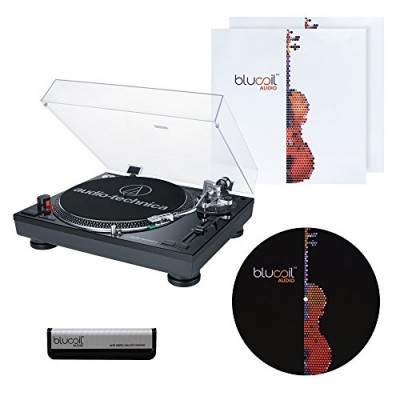 The AT-LP120USB features a rugged cast aluminum construction with line and phono audio outputs. A USB output will interface with Mac or Windows computers and give DJs the ability to digitize their vinyl collections. Auda.. 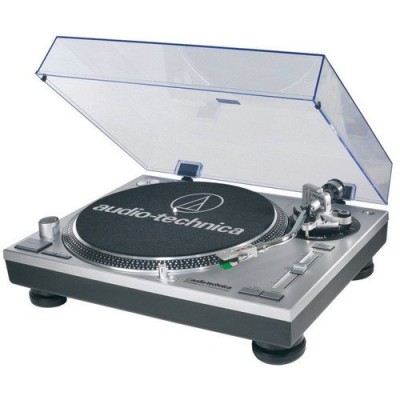 Audio-Technica's AT-LP120-USB direct-drive, high-torque professional turntable is perfect for DJs and other music enthusiasts, especially in an era that many would call "postvinyl," when it's no longer the norm for audio.. 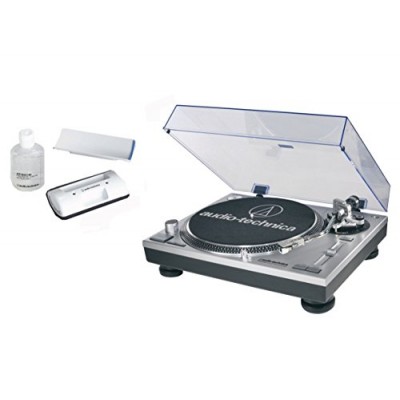 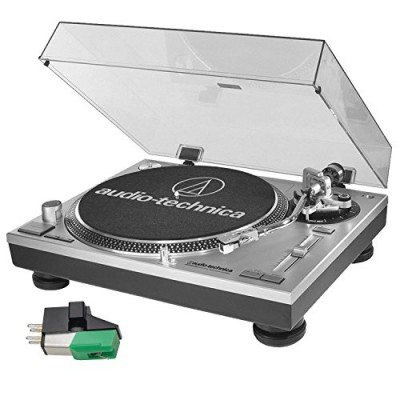 This professional stereo turntable features a high-torque direct-drive motor for quick start-ups and a USB output that connects directly to your computer. Other features include: forward and reverse play capability; cast.. 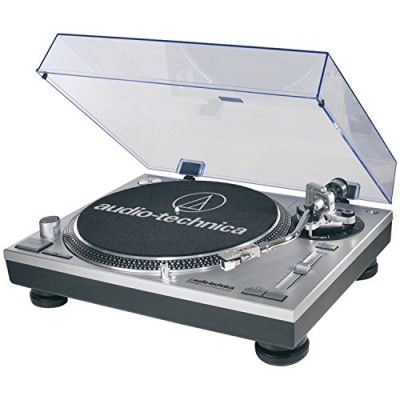 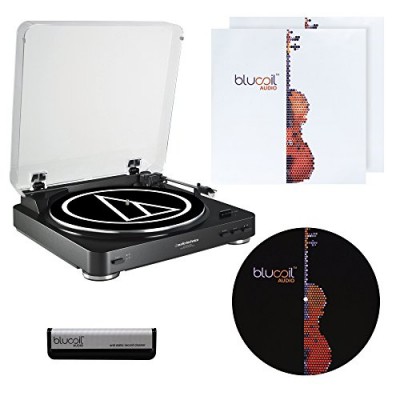 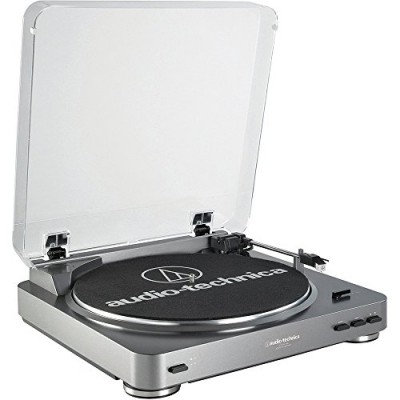 Help your customers get their classic albums off the shelf and into their MP3 player. Audio-Technica brings its legendary quality and audio fidelity to the digital realm with this LP-to-digital recording system. The Audi.. 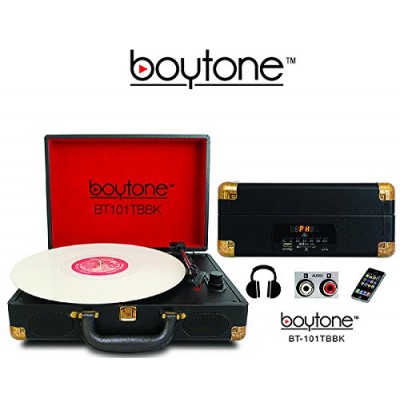 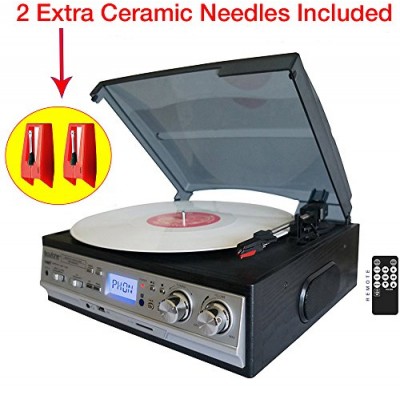 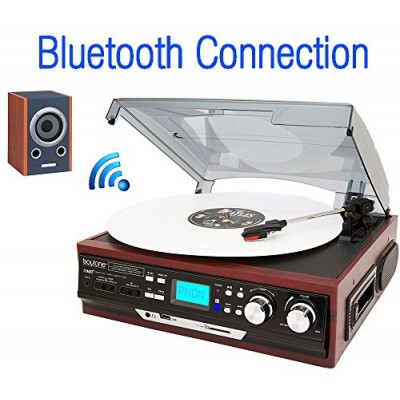 Boytone BT-37M-C record player turntable with modern technology. Ability to convert vinyl records, Cassette AM/FM Radio into MP3 files format without a computer or any programming - Save your music. Connect Wirelessly to.. 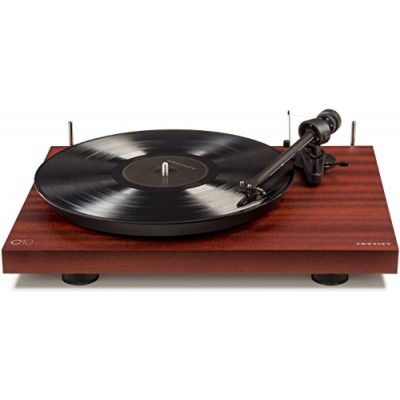 Crafted for the vinyl enthusiast looking to take the next step in their vinyl experience, Crosley's C10 is perfect for enjoying the distinctive warm sound of vinyl. This sleek turntable comes equipped with a low vibratio.. 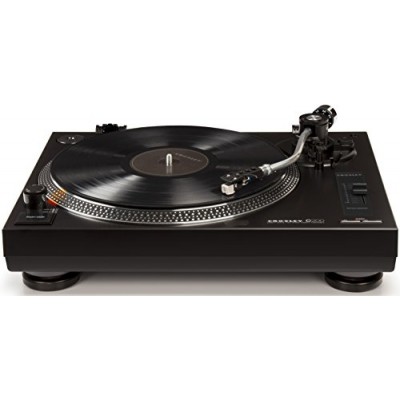 Get up to speed with the direct-drive power of the Crosley C200. With more control than ever over the speed of your discs, this sleek, powerful turntable was built to mix it up. A sharp Audio-Technica magnetic cartridge ..